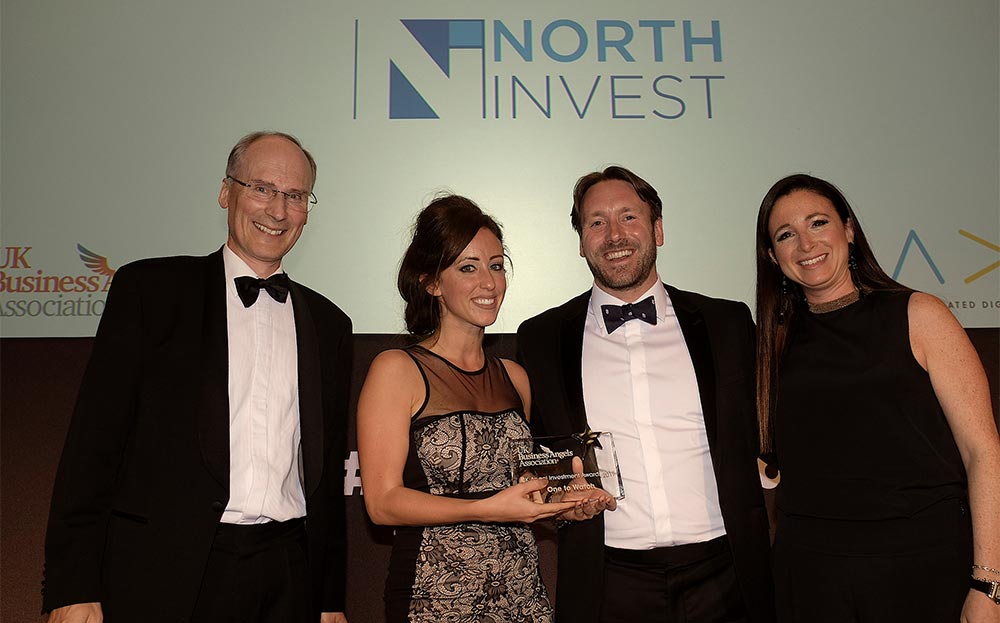 NorthInvest, the angel investor platform that supports and mentors businesses in the North of England, has been recognised as ‘one to watch’ at the UK Business Angel Investment Awards 2017.

Founded in 2015 by aql CEO, Professor Adam Beaumont, NorthInvest is a not-for-profit platform owned by its angel investor members. It was formed to address a gap in the funding ecosystem to provide easier access to mentorship and seed funding for start-up companies.

Shortlisted in the competitive Best New Entrant to the Angel Ecosystem category, NorthInvest won the ‘one to watch’ award, with UKBBA judges recognising NorthInvest’s drive to unlock new sources of funding for entrepreneurs. The ceremony was held at the Dorchester, Mayfair, London on 6 July and was hosted by entrepreneur and UNICEF ambassador Emma Sinclair MBE.

NorthInvest started in Leeds, but has a pan-Northern focus supporting growth in the Northern Powerhouse. It was one of the first Northern Powerhouse Partners, whose membership was announced at the launch of the scheme and is also a major sponsor of Leeds 2023, the city’s bid to become European City of Culture.

The UK Business Angels Association (UKBAA) brings together investor communities across the UK, with NorthInvest providing a conduit into the Northern cities.

UKBAA judges said: “NorthInvest has shown clear potential to address the challenges tech entrepreneurs face in accessing angel investment across the Northern Powerhouse regions, drawing on the time and expertise of a group of tech entrepreneurs and key players in the region to build a new platform to showcase deal flow and increase connectivity.”

NorthInvest founder and Chair, Professor Adam Beaumont, said: “As an investor and mentor for start-ups, I’ve learnt that business growth is a team game. It’s important to be able to find co-investors to syndicate with and to bring additional skills to the table. The NorthInvest team has been working hard to provide this platform.

“We’re now ready to handle more deal flow and have plans to launch partnerships with Universities across the North of England, working with innovation hubs. Our board has strong expertise in this area and we’re keen to live up to the ‘one to watch’ accolade.”

Shelley Langan, business coordinator for NorthInvest said: “During my involvement over the past year, the scale of the opportunity is huge and we intend to grow through partnerships wherever possible. If there’s a successful network we intend to work with those partners to expand our footprint.”