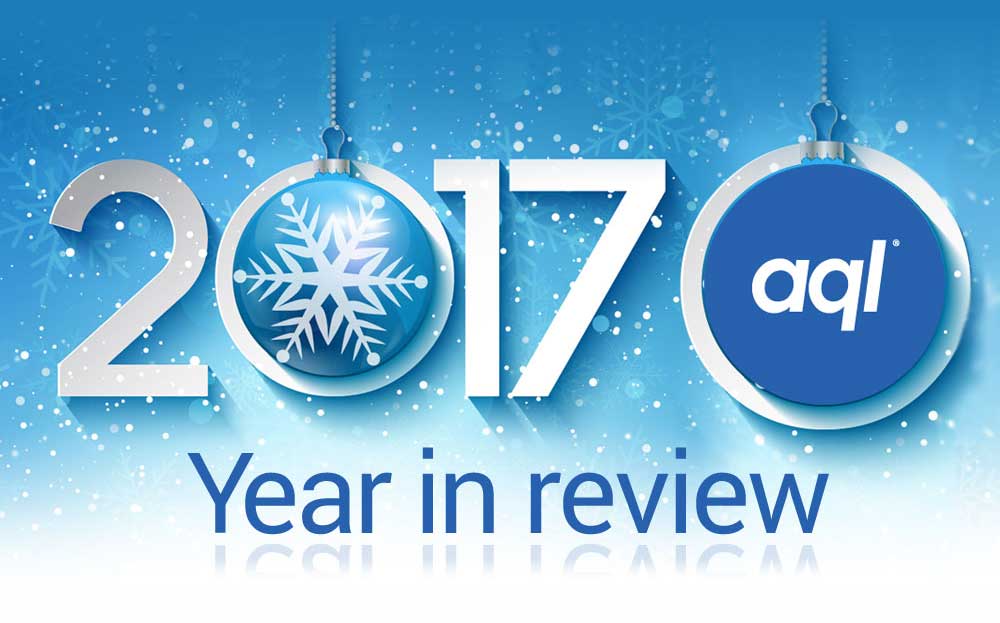 It’s been quite a year.

With growth across every product set, a brand new state-of-the-art data centre, and a hand in Leeds’ bid to become the UK’s first 5G test city, it’s been a transformative 12 months for aql.

The company continues to energise growth across the North through investment in digital infrastructure, build the workforce of tomorrow with a focus on education and diversity, and connect the community through technology and participation.

Our goal in everything we do is to create a comprehensive tech ecosystem in the North, and transform the region into a hub for digital innovation. And while there’s much work ahead, we wanted to take a moment to look back on the year that was, and celebrate some of the highlights.

aql signed some of its biggest, longest-term deals ever this year across data centre colocation and messaging, including some 10 and 15 year agreements, driving revenue and supporting increased investment in infrastructure, staff and the region.

To keep up with demand, aql welcomed dozens of diverse new aql-ers on board, and opened a brand-new data centre in Leeds’ South Bank. The Northern Powerhouse Minister, noting that the new data centre “will make Leeds a hub for digital development in the North”, cut the ribbon at the official opening ceremony.

Competing against around 30 other operators, aql won the contract to supply universities, colleges and teaching hospitals across the UK with supercomputing power and secure data storage via a Jisc framework agreement, and was approved to provide fibre and wireless broadband to businesses as part of DCMS’s new Gigabit Voucher Scheme.

aql continues to play a key role in Leeds’ bid to become the first 5G city in the UK. As a “city enabler”, we will focus on providing the supporting engineering behind next generation networks. aql’s investment in infrastructure for low latency, low rated, high capacity connectivity means Leeds is uniquely placed to make the most of 5G by way of supporting near-future technologies such as driverless cars and the internet of things.

In keeping with our commitment to digital education and building the workforce of tomorrow, company founder and CEO Adam Beaumont received a visiting professorship in Cyber Security at the University of Leeds. The position is something of a homecoming – after completing his PhD in Physical Chemistry aged 24, he previously served as the university’s youngest lecturer.

Beaumont joined the board of the Leeds City Region Enterprise Partnership (LEP) to further aql’s aim of driving growth in the region with a focus on digital.

He also joined the board of the Eden Project as a trustee. Beaumont comments: “With technology having impacts as diverse as creating power-hungry cryptocurrency, to the rise of the machines making certain jobs obsolete, it’s more important than ever to consider how innovation affects our environment. It’s been a long-term aspiration to work with the Eden team and I’m enjoying the challenge of how to use technology to connect not just people to each other, which is what aql has always done, but also to connect them to the planet”.

aql’s historic Salem Chapel HQ continues to serve as a hub for the community, one of the region’s most in-demand tech venues, and a launch pad for Government initiatives – George Osborne returned at the start of the year to launch the first Northern Powerhouse Partnership report, and Minster for Digital Matt Hancock visited in November to discuss next generation infrastructure and to understand aql’s founding role in the region.

Some of the highlights of Salem’s 2017 events calendar include FinTech North, Northern Power Women Live, Leeds Digital Festival, Northern Powerhouse’s Nordic-Baltic fintech trade mission, Ahead Partnership’s Girltech and Digital Leaders’ annual lecture – outside of London for the first time. The focus with events at aql is not only technology but on helping young people, the region and charities.

aql is a founding partner in the Government’s Northern Powerhouse initiative, and Beaumont led a delegation of Northern business leaders to San Francisco for a first-of-its-kind Northern Powerhouse trade mission in April. The mission forged links with tech companies, startups, investors and incubation experts, and promoted US-Northern Powerhouse collaboration. The return flight even saw a deal struck between aql and CircleLoop, a Manchester-based cloud phone system provider.

The individual strands of aql’s work together weave a region-wide digital tapestry. By creating the infrastructure, building the right skill base through education, and bringing together an ecosystem of opportunities and collaborators, aql is catalysing digital growth in the North. 2017 saw significant progress in that direction, and sets the stage for an exciting 2018.

The company, its people and its work received recognition throughout the year: aql was highly commended for its VoIP Infrastructure at the ITSPA Awards, Salem Chapel was shortlisted as one of the world’s most beautiful data centres at the DCD Awards, the company was highly commended by the West and North Yorkshire Chamber of Commerce, Beaumont was awarded International Director of the Year by the Institute of Directors, and Chief Operating Officer Sarah Tulip was named to Northern Power Women’s Future List.

NorthInvest, the not-for-profit investment platform also founded by Beaumont, was recognised as ‘one to watch’ at the UK Business Angels Association Awards, and highlighted in the government’s Powerhouse 2050 report for its potential to help transform the North’s economy. The nascent company represents another important step towards building a comprehensive tech ecosystem in the region.

aql and Beaumont’s work received significant press coverage, too, from The Sunday Times, the BBC, The Yorkshire Post and many others.

aql was involved with a bunch more exciting and meaningful projects in 2017. August saw the company provide tech including fibre connectivity, mobile messaging, secure data connectivity and even access to its atomic clock as the official communications sponsor for Cowes Week, the largest and oldest regatta of its kind.

Beaumont, several customers and some of the aql team, all keen sailors, competed in the regatta, as well as in the 50-mile Round the Island race, with gold medallist blind sailor Lucy Hodges MBE joining them at the helm. aql’s 45-foot yacht, the Ratatosk, finished 17th out of 1400 boats in the latter. Funds raised from the race were donated to the Blind Sailing charity run by Hodges.

The company will continue to power communications at Cowes Week in 2018 to help the event flourish and reach a wider cross section of the sailing community.

Particularly meaningful were the historic documents and certificates, including a WW1 roll of honour for Hunslet, discovered under floorboards at aql’s Salem Chapel HQ. The documents were lovingly restored in 2017, with a digital roll of honour created for Remembrance Day to allow those with family roots in Hunslet to search the names of the fallen. The original documents are currently on display in aql’s offices and will be on public view next year.

aql continued to actively participate in the local community, and work with a range of charities and organisations that make a difference, including partnering with Leeds United on ‘One Day for Toby’ to raise money for a four-year-old fan with neuroblastoma, as a proud supporter of the Leeds Community Foundation, on diversity initiatives with Ahead Partnership, Children in Need, Leeds Abbey Dash, Child Friendly Leeds, Mencap Leeds and many more. Leeds is a big part of the company’s DNA and we care passionately about the region and its communities.

Much of 2017 was spent putting in place the strategy and people that will drive aql’s growth for years to come. With our new aql-ers settled in, a pipeline of cutting edge products and initiatives, and 5G innovation, it’s an exciting time for aql, our customers, and the region.

As we look into the new year, the company will continue to play a major role in shaping the future of the region through the Northern Powerhouse; support and participate in the local community; and push forward with diversity and digital education to build the region’s tech talent pool – all with the goal of putting the North on the global digital map. We’re excited for what’s to come, and we hope you are, too.