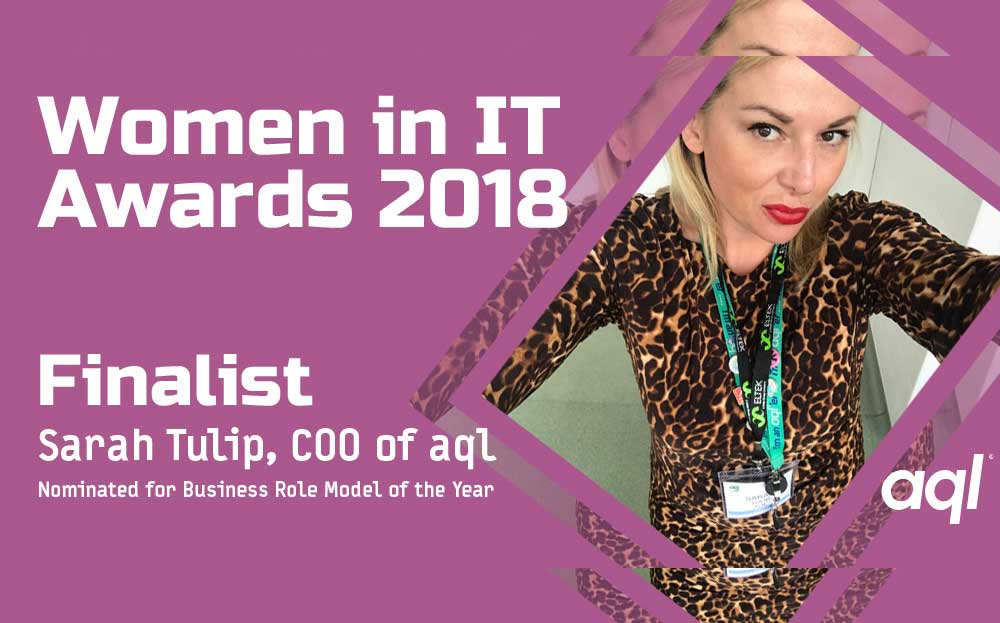 Sarah Tulip nominated for Business Role Model of the Year

What a way to start the new year!

aql’s chief operating officer, Sarah Tulip, has been nominated at the 2018 Women in IT Awards in the Business Role Model of the Year category.

In a male-dominated tech sector, Tulip is leading the charge to get women into the workforce. Since joining aql in 2016, she has increased the number of women among the company’s ranks by over 50% and placed women in every technical team. Not coincidentally, this has been among the most successful periods in the company’s 20-year history.

Tulip is a key influencer in the Northern Powerhouse and a Fellow of the Royal Society for the encouragement of Arts, Manufactures and Commerce, through which she contributes to the formulation of national policy on social inclusion.

She plays active roles with Leeds Digital Festival and Leeds International Festival and lends her support to many women’s organisations in the region. She sits on the Leeds Digital Board; on Leeds City Council’s committee to address skills gaps and shortages in the city; and works on other city-wide council groups around Brexit, retaining talent and developing skills.

As an ambassador for the Ahead Partnership, she gave a 2017 keynote address to 140 13-year-old girls to encourage them to choose digital subjects in their GCSEs. She continues to drive this initiative in 2018.

She was named last year to Northern Power Women’s Future List for her commitment to championing women in tech and her impact on the region, and highly commended in the Corporate Leader category at Forward Ladies’ National Awards 2017.

Says Tulip: “The North has the potential to be the UK’s most important tech hub, and aql is playing a key role in making that happen, building both the underlying infrastructure and, crucially, the workforce that will drive this growth. Diversity is central to how we think about our business and the region as a whole – we aren’t going to benefit from the next great ideas unless we embrace all backgrounds and perspectives. We have to attack the issue from every angle, with a focus on getting girls into tech as early as possible”.

The Women in IT Awards is the world’s largest tech diversity event. More than 1,100 business and tech leaders will come together on 31 January in London when the winners will be announced.