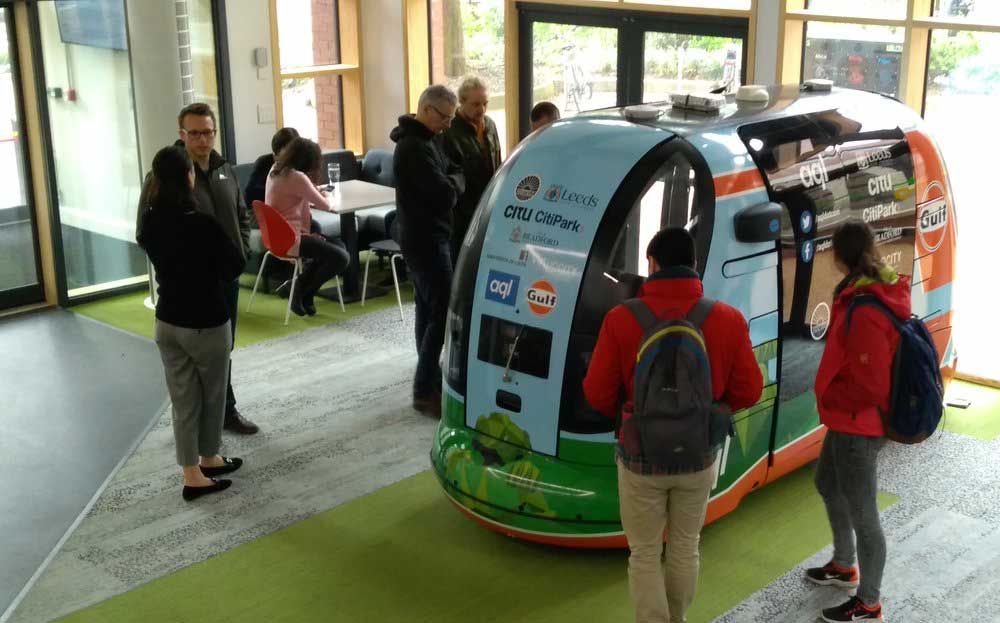 aql founder outlines vision for transport in the region

aql’s founder and CEO, Prof. Adam Beaumont, yesterday outlined his vision for transport in the region. He was speaking at ODI Leeds’ ‘The Future of Transport in the North’ showcase as part of Leeds Digital Festival.

The company recently unveiled its first autonomous POD and announced a consortium of partners, including Gulf Oil, the University of Leeds, Leeds and Bradford city councils, Citu and CitiPark to trial the PODs in the South Bank area of Leeds later this year. The POD was on display at the ODI event.

As a wholesaler, aql doesn’t produce end-user products. It instead delivers services at the API and open protocol level. “We build the scalable building blocks that can support innovation and get it to market quicker,” said Beaumont.

“As we’ve built up the infrastructure that we’ve needed to support massive text messaging platforms, massive IoT platforms – and IoT is something we’ve been doing for over 10 years in the data space and 20 years in the signalling and messaging space – we interface with other parties” to deliver end-user products.

This wholesale, behind-the-scenes philosophy is shaping how the company approaches its autonomous PODs, he explained. “We just want to manage the fundamental safety switch, the off button. That’s a binary, that’s a Boolean, it’s a zero or one, it’s a go or a stop. We don’t want to get involved in the innovation above that because we want to enable it.

“We want to work with innovative software companies and individual coders because I believe that the next generation of transport software is not going to be delivered by transport companies. I think it’s going to be delivered by innovators who are looking at being spatially aware in different ways. It might be medical imaging software specialists, it might be virtual reality or augmented reality software specialists, it might be gaming.

“By creating this platform, removing the top layer and creating open standards interfaces to allow these fundamental systems to be controlled, we can essentially allow it to be tested and played with safely in a controlled environment in controlled parts of the city to see if we can do something a little bit better because it’s all about integrated transport.”

Beaumont is involved with shaping the region’s transportation future even beyond autonomous vehicles. Earlier this year, he helped launch Transport for the North’s ambitious Strategic Transport Plan from aql’s HQ, with the goal of transforming the North’s transportation infrastructure over the next 30 years.