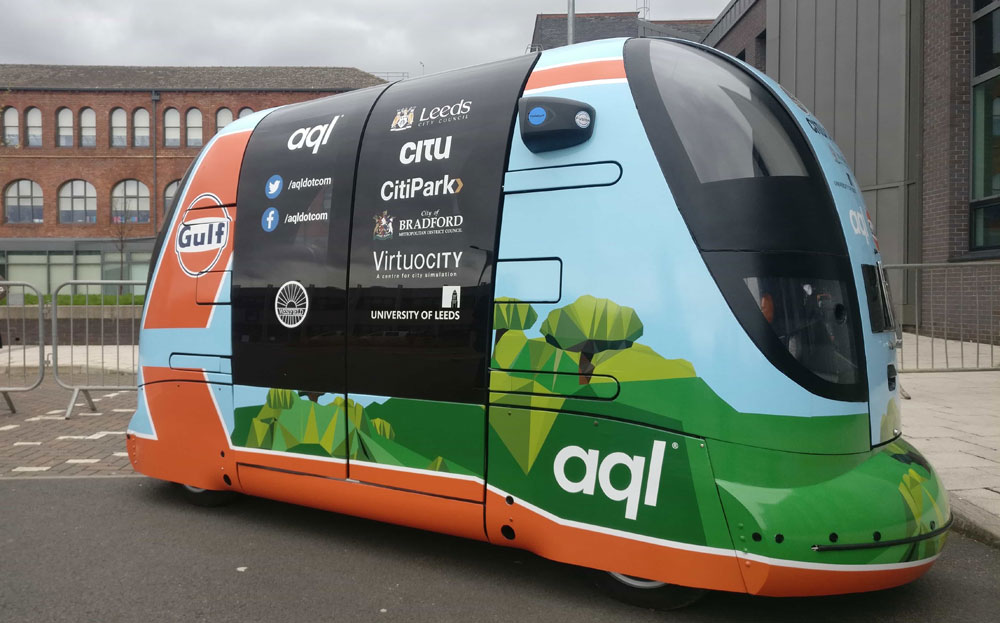 The ‘super-connected’ PODs will be deployed in a controlled environment on the South Bank and aql will be conducting real-world testing of newly-developed software systems. aql’s mobile operator division holds 5G test licenses in the UK and the company is currently building the supporting infrastructure behind 5G in Leeds.

Autonomous technology has the potential to reshape public transport and reduce congestion, commute times and pollution. It can also improve passenger and pedestrian safety.

aql’s vehicles will be based on the Westfield POD, a platform chosen to allow innovation in autonomy. aql, with 20 years’ experience in cyber security, will manage the vehicles’ safety controls and then open the platform to the developer community to allow further innovation.

Prof. Adam Beaumont, founder and CEO of aql, says: “Until now, much of the software for autonomy has been driven by the automotive industry. We want to embrace other disciplines such as VR and gaming which have strong transferable spatial awareness skills to help innovate and create the next generation of smart city. Without this technology, driverless cars, for example, will simply join the traffic queues – we need cross-city communication and coordination via the next generation of mobile network technology to unlock the potential of driverless platforms.”

The initiative is part of a wider programme and comes out of a consortium that includes aql, Gulf, the University of Leeds, Leeds and Bradford city councils, and forward-thinking developers such as Citu and CitiPark to look at how to layer autonomous vehicles into the city. “We see the South Bank as a blank canvas to create an integrated plan,” says Beaumont.

The announcement follows the debut of the first POD as part of Leeds Digital Festival. It has been on display around the city, including at Leeds City College alongside a jet pack flight – part of aql’s commitment to inspiring the next generation of innovators. It will today appear at ODI Leeds’ ‘The Future of Transport in the North’ showcase and at the University of Leeds’ Institute for Transport Studies.

Jonathan Turner, CEO of Bayford Oil, says: “The Gulf brand is world-recognised as a leader and enabler in motorsport and transport, but our history is largely around fossil fuels. We are passionate about embracing the transition to renewable energy and continue to support innovation in electric transport and the next generation of autonomous transport. I have a vision for enabling the future of motorsport and transport whilst minimising our impact on our planet.”

Ben Ziff, Managing Director of CitiPark, says: “Here at CitiPark, we like to be at the forefront of innovation in transportation, pushing the boundaries and looking for the next big innovative technology and sustainable transport. So, we are delighted to be part of the first cross-regional team of autonomous transport operators to launch this incredible prototype.

“We are very excited to be working with aql, NorthInvest and Westfield Technology to launch this state-of-the-art autonomous vehicle, which will offer sustainable transport within urban areas around the UK. Our joint transport team will be focusing on this and other innovative ways to provide wider accessibility and safety for passengers around the UK going forward.”