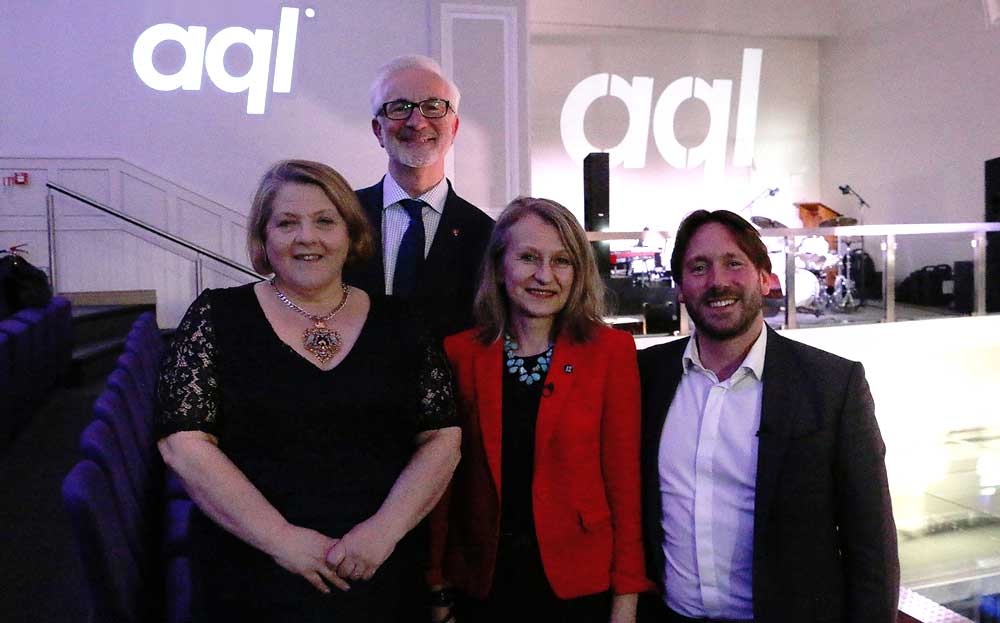 The Estonian Consulate to the North of England and the Isle of Man was officially opened yesterday, during Leeds Digital Festival, at aql’s historic HQ in Leeds. Estonia is the home of citizen-centred transformational technology, including its world-leading e-residency scheme, making the festival a fitting time to mark the growing relationship between country and region.

Estonian Ambassador to the United Kingdom Tiina Intelmann opened the consulate and inaugurated Prof. Adam Beaumont, founder and CEO of aql, as the Honorary Consul in Leeds.

Beaumont has built relationships with Estonia over the last three years from a number of trade missions and trips to different regions of Estonia, and from hosting delegations in Leeds. He recognised the advances the country was making in digital government and in creating the building blocks for a data-driven society and became a vocal advocate, going on to co-found UK:Estonia Techlink – a technical collaboration platform to build partnerships between companies and startups in the two countries.

NorthInvest, Beaumont’s not-for-profit investment platform, continues to grow its relationship with EstBAN, the Estonian business angels network. He previously accompanied the Duke of York and other dignitaries from the UK Government to Tallinn for the Pitch@Palace entrepreneurship competition.

As a visiting professor of cyber security at the University of Leeds, Beaumont is working with leading Estonian cyber companies on a range of topics, including security and the importance of integrity technology, which he refers to as ‘TrustTech’.

“My reasons for opening the Consulate were to provide a private-sector conduit between our two countries. Over the past three years, I’ve made many trips to digital Estonia and wanted to make a solid pledge that our countries are aligned. The opening of the Consulate is one part of this pledge. During this time, we’ve hosted many successful business delegations in both Estonia and the UK, including being part of Pitch@Palace in Tallinn,” said Beaumont.

“I’m keen to build long-term foundations for digital and cultural collaboration. It was clear from the visit to Leeds of Tiina Intellman, the Estonian Ambassador to the UK, that there is an extensive alignment between our cultural values. This culminated in many commitments of cultural overlap towards the city’s 2023 bid as Cultural City. This was celebrated with two performances by Susanna Veldi, a notable Estonian jazz singer, at Bramham Park and aql HQ, in both instances backed by her friends at Leeds College of Music.”

“Leeds and its surrounding area is one of the main centres of Estonian community in the United Kingdom. The rapidly developing city of Leeds with a population of 800,000 is a major hub for banking, financial services, digital and creative industries that makes it attractive for Estonian companies. Leeds could provide perfect opportunities for Estonian businesses to enter the British market,” said Ambassador Intelmann.

The Lord Mayor of Leeds, Councillor Jane Dowson, welcomed the Estonian delegation, which included government officials and senior representatives from companies such as LHV Bank, Mooncascade, Mobi Lab and Spectx. “Having the Estonian Consulate here in Leeds brings all kinds of exciting, rich opportunities – in culture; trade and investment; and best practice sharing – particularly around technology and digital,” said Dowson, adding, “it’s our honour as a city to host the consulate for the region and cement the bonds between Leeds and Estonia.”

The opening of the consulate at aql HQ recognises Beaumont’s work to this point and marks a new phase of collaboration between the two countries, on both the public and private side. Beaumont, aql and NorthInvest are continuing to drive this relationship, and to learn from and build on the ground-breaking work being done in Estonia, to transform the North into a data-driven society and create opportunity for everyone.

The purpose of the consulate is to provide consular services to Estonian residents in the North of the UK and the Isle of Man.